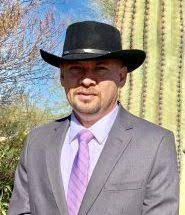 Art Del Cueto has been with Border Patrol since 2003. His first duty station was Casa Grande, Arizona, where he helped in the effort to establish a new substation at Three Points, Arizona. Throughout most of his career, Art patrolled on the Tohono O’odham reservation, assisting in numerous drug and smuggling cases. As a representative of the bargaining unit members, Art has responded to over 90% of all significant incidents within the Tucson Sector including shootings, accidents, and agent assaults. As an Agent who is fluent in Spanish, he routinely leads the questioning of apprehended subjects.

Art has served as the Vice President for the National Border Patrol Council. He also currently serves as President of Local 2544 in the Tucson, Arizona sector. Prior to working for the United States Border Patrol, Art worked for a maximum security state prison in Tucson. Art is originally from Mexico, deriving his U.S. citizenship through his father, but grew up in Douglas, Arizona. Art has lived the majority of his life in Arizona.

Art is the national spokesperson for the National Border Patrol Council. Art has had the ability to express the many concerns of the agents he represents as well as the issues with Border Security. Art has appeared on most major news shows on Fox News, CNN, Al Jazeera and HBO VICE. Art has also been on countless radio shows. In addition, Art is the host of his own show, The Green Line broadcast on KNST Tucson and available through IHeartRadio.